Home /Featured Articles / Tips from a Creative Director: Give Your Big Ideas Room to Grow

Tips from a Creative Director: Give Your Big Ideas Room to Grow

We were tasked with designing a brand campaign site, which quickly spiraled into an organizational nightmare. The site would have hundreds of pages, and multiple customer journeys. There was so much to keep track of such as videos, e-commerce, and a blog, which only added further layers of complication. Drawing out the structure and UI of such a mammoth site was a difficult task, and keeping everything organized was a difficult challenge and became less efficient over time.

We started drawing the site map on a traditional whiteboard, but quickly ran out of space. We did what everyone would do in that situation and began extending the whiteboard by taping poster along the walls to jot down our train of thoughts. Soon enough, every inch of the wall space was covered— but we still weren’t close to finishing. So we improvised again; this time covering the floor. At a certain point, only the ceiling wasn’t covered.

With the first part out of the way, we could finally begin discussing the website structure. Before we were able to even start, an account executive popped into the room to tell us that we had to clear out because the room was booked for a client meeting. We frantically whipped out our smartphones and started snapping pictures of the whiteboard, as well as the paper that snaked around the room. We hastily erased the whiteboard and collected the papers in stacks as the client walked in. In order to keep our discussion going, we threw all the pictures into a document. Nevertheless, we soon realized that many of the photos were out of focus, and the blurry words were illegible. My head felt as jumbled as all those stacks of papers.

Jamboard Gives your Creative Ideas the Space They Deserve 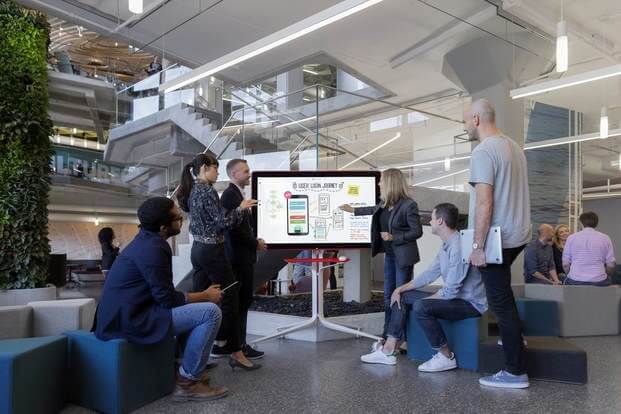 My agency was toying with an idea of a new brainstorming method, and the UI debacle only made it more evident that something needed to change. Jamboard made the most sense with its creative and project management tools, and integration with G Suite. Brainstorming on this collaboration device feels just like a traditional whiteboard, but more fluid, efficient, and with no space limitations. If we fill up a Jamboard with work, we can simply click to add a new page and continue brainstorming. All the work is automatically saved to the cloud— we’ll never have to write ‘DO NOT ERASE’ again, or take blurry pictures of the board.

One issue that kept cropping up with traditional whiteboards was handwriting legibility. Jamboard’s auto-handwriting recognition converts written text into a font, and even a shape— now you can draw perfect circles or squares in a flash. Mapping out our client’s website using a Google-powered collaborative whiteboard is now quick and easy. Using Jamboard, the consumer journey, product demonstration, check out features can each have their own color, font and shape to keep our new ideas separated and neatly organized. We no longer have the problem of running out of room, or having to waste papers. Jamboard gives our ideas as much space as we need. 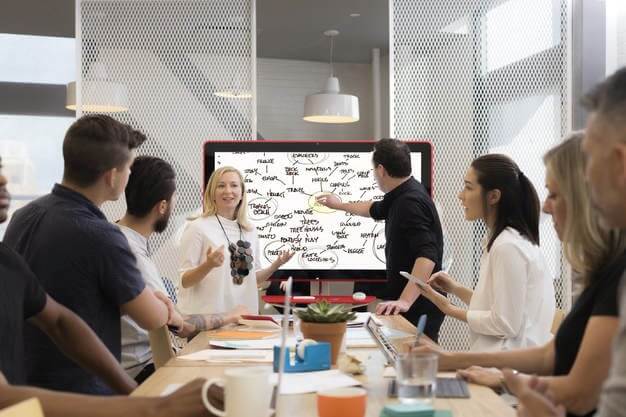 Creative brainstorming can get messy, but color-coding all our ideas on Jamboard can keep us organized. We can easily drag in images from Google to create a mood board that helps us explain and convey the concept better. Combining text with images lets everyone in the meeting understand an idea better and faster, making our collaboration meetings far more efficient.

When we discuss a client’s brand positioning, Jamboard saves us a lot of time. We begin the process by drawing a big cross, then drag in images of competitors, adjacent industries, or any potential areas our client can own. Each image can be moved and resized. By visually presenting our strategy, it allows us to stay focused, and come to conclusions on brand concepts much faster.

Revisiting our brand-positioning meeting is a simple process using cloud collaboration. Everything on a Jamboard is automatically saved in the cloud, and bringing up work from a previous meeting requires just a tap. Anyone can provide feedback and collaboratively edit from the Jamboard App all at the same time — notes from the app appear instantly on the interactive whiteboard. It's a faster and more flexible way of giving feedback compared to a traditional whiteboard. 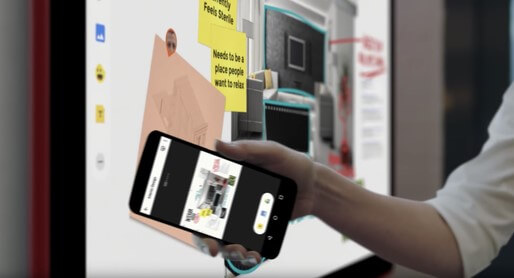 Moving a Jamboard session between rooms is quick and easy. If a conference room is booked, or we run out of time, we can easily pick up right where we left off. Jamboard will automatically save everything in the cloud, and sharing work is easy through the mail function. Once the files are shared, we can continue our discussion on another Jamboard. We spend less time organizing our ideas, and more time creating great work for our clients.