As Hsin-yao Huang, the Winner of the Golden Horse Award for Best New Director said, he doesn’t want to see movies fading their color on other media

“Rich people lead a colorful life, while poor people’s lives are black and white.” This line is an excerpt from the movie, The Great Buddha+. This movie, with 90% of its frames produced in black and white, win 5 awards in the 19th Taipei Film Festival and the Award for Best New Director in the 54th Golden Horse Film Festival for its director, Hsin-Yao Huang. Strong contrast between color and greyscale is used by Huang to express people’s helpless in dealing with social gap. Much like many other movies, colors are endowed with special meaning in the story. The director crafted on every detail, from the costume and art design in the pre-production period, to the lighting, color temperature and costume textures during the shooting, and the post-production light and color, to focus on the accurate feeling presented by colors in the story.

The birth of a great movie relies not only on the director’s efforts but also those of all the staff involved in every aspect of the film production. Every detail of making the movie is interconnected. From the script creation to the on-set filming, from the hardware to the software, every aspect of the whole process must be fully taken into consideration seriously. Despite all these painstaking efforts, Huang seldom watches his own works after they are finished.

Huang: “Unless the movie was shown in a movie theater or in other excellent playing environments, I wouldn’t want to watch it again. Watching the movie in an ill-equipped environment makes me feel sad,” said Huang, with some frustration. 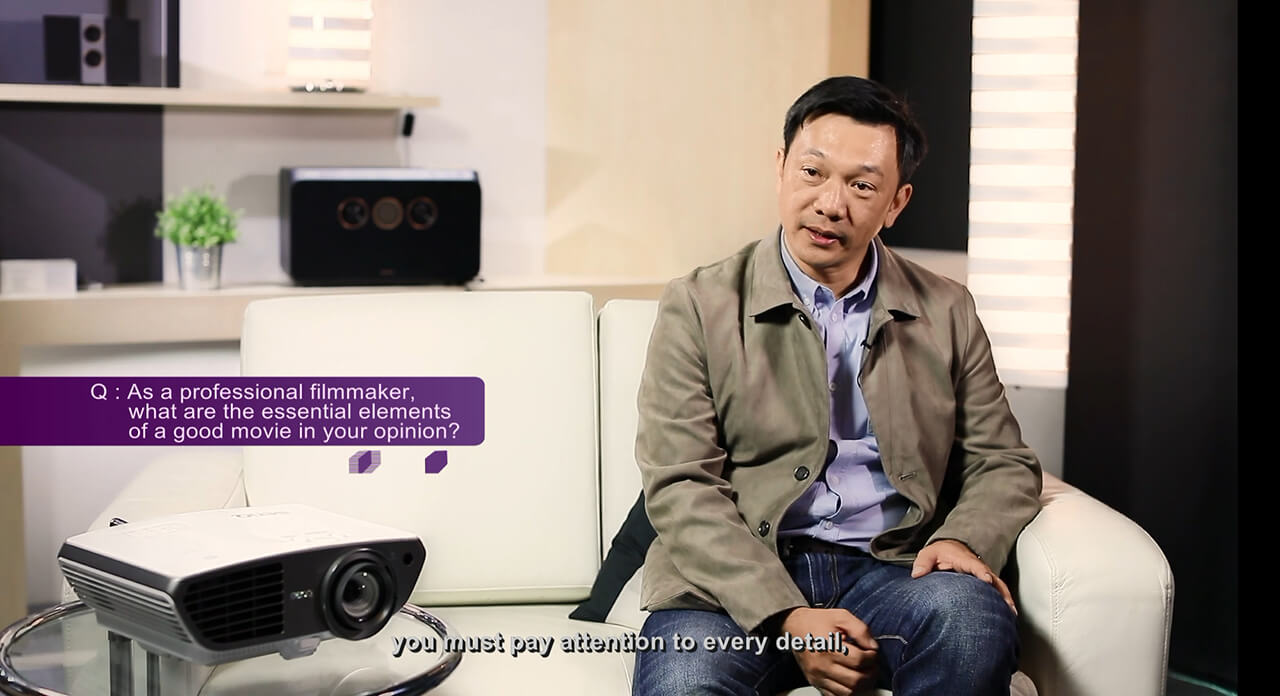 As a professional filmmaker, what are the essential elements of a good movie in director's opinion?

The advancements and changes in technology have altered people’s habits to watch movies. In the past, people had to go to movie theaters to watch the latest movies. If you wanted to reminisce these movies at home, only VHS was available. Later, VCD, DVD, and Blu-Ray video formats were introduced to the market one after another. Although the images in these video formats cannot compete with those from cinema projectors, the image quality has been enhanced considerably, much vivider and more delicate than what VHS could provide. It appears on the surface that these formats have enhanced the viewing quality. However, they also bring about hidden concerns that directors cannot ignore. Unlike the cinema projectors which shine a light through a transparent lens and then project images unto the big screen, these new media require a flat panel display which uses back-lighting. And the LED back lit monitors make it easier to have inaccurate colors.

When You Talk about “Red”, Which “Red” Are You Referring to? The Director’s Well-crafted Designs Are Often Overlooked

H: “Colors are often manipulated in movies to portray different ambiances. In The Great Buddha+, the movie was mainly in black and white, and intermingled with some colors. The contrast between black and white and the colors was to highlight the tension of the story. Another example is the color red. In the movie Grand Budapest Hotel in 2014, the color red was saturated, and it was so red that it not only told a wonderful story but also stimulated a sense of comfort for the audiences. But later, as I watched the movie again in a friend’s house, the red was so striking that it nearly distracted me from the plot. That’s why I find color accuracy an extremely important factor. When the colors are inaccurate, the movie loses the original intentions of its director and other staff. On the other hand, these inaccurate colors could distract the audiences from the movie, which I think is a great pity.”

Huang believes that color accuracy is an essential part of movie-viewing. But as a director, he can merely supervise the colors of the movie only when the movie is finished.

H: “Once the movie goes to playing phase, it is out of my control. Some people watch the movie on TVs and computers. Nowadays, more and more people watch movies on their cellphones and tablets. Each manufacturer has its own built-in video set as well as video optimization. I often say that when someone over-edits his or her photos, people may not be able to recognize who he or she is. Similarly, when a video is over optimized, it loses its original details which the movie intents to present. Thus, I have the habit of not being willing to re-watch my movies after they are completed because their original colors are lost when being played on different play tools.”

Movies are shot via the principle of photosensitivity. In the beginning, they were recorded on film negatives, and for now they are being filmed with digital movie cameras which are also working via the concepts of photosensitivity and projection to produce images. Huang believes that the best way to watch a movie in the colors intended by the director is to use a projector while leaving the movie theater.

H: “When I was filming The Great Buddha+, I created the scenes for theater watching, with no consideration of what the film would look like on TV. Not long ago, I watched a documentary-style movie called Into Great Silence by Philip Gröning (Il Grande Silenzio) using a BenQ W3000 projector. The movie tells about a very quiet monastery locked in snow and how the monks spent a long winter in the monastery.

There is no dialogue in the whole movie, but watching it on a large screen, especially with a projector, allowed me to immerse myself into the movie’s environment. It seems as if I were living with the monks through the long winter there. This experience was completely different from watching it on TV or computer screen.

For a director, what is the best way to watch a movie except watching it in a movie theater?

To be honest, it was the first time for me to watch a movie on such a big screen with a projector at home, and all I want to say is that this experience was just exhilarating. Once you have this set at home, you will want to re-watch all the movies you’ve watched before. You may have watched them in DVD or Blu-Ray formats on a TV screen but re-watching them with a projector brings out a whole new level of depth and detail.”

H: “The most important thing of watching movies at home is the quality consistency in their images and sound. In the same way that filmmakers follow the Rec. 709 or DCI-P3 industry color gamut, television and home entertainment systems have their own sets of specifications, and Blue-Ray and other digital TV platforms follow these specifications. And if our movie-play system could conform to the standard color gamut, it will be able to present the closest colors to the original ones. In other words, it could provide more accurate color restoration, which in my opinion matters more than anything else in watching a movie.”

Profile
Hsin-yao Huang is a documentary director. He holds a Master’s Degree from the Graduate Institute of Studies in Documentary and Film Archiving, National Tainan University of the Arts.

・In 2011, Huang won the Grand Prize and Best Documentary Award at the Taipei Film Festival with his movie Taivalu. The Great Buddha was Huang’s first short drama film. It was nominated for Best Short Film at the 2014 Golden Horse Awards.

・In 2017, Huang expanded on The Great Buddha and produced the full-length drama, The Great Buddha+. It was not only selected as the opening film for the 19th Taipei Film Festival but also swept the Grand Prize, Best Narrative Feature, Best Art Direction, Best Music, and Best Editing Awards. The film was also nominated for ten awards in the 54th Golden Horse Awards, including Best Feature Film and Best Supporting Actor. The film won four Golden Horse Awards, including Best Adapted Screenplay, Best Cinematography, and Best Original Movie Soundtrack. After twenty years of filming documentaries, Huang himself won the Best New Director Award.

What do you need to know before building your 4K Home Theater System?

To build your own home theater system, you need a projector first. But you cannot buy just ANY projector; you need a 4K projector. When we talk about 4K, it refers to the resolution. There’s generally 2 spec.: 3840 x 2160 or 4096 x 2160 pixels for 4K projectors. The more pixels, the more vivid the picture contents.