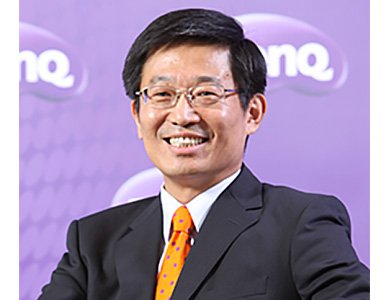 Since its inception, BenQ has embraced "Bring Enjoyment 'N Quality to Life" as its corporate vision, aspiring to realize the ideal of helping people to enjoy the pleasure brought by science and technology via the provision of the branded quality products and services of BenQ.
We are fully aware that the in addition to the pursuit of profits and growth, the most important significance for the formation of any enterprise is to fulfill its social responsibility by creating unique values, which can last for a long time, transcending time and space, and produce positive influence on society and people.

Consequently, BenQ has spared no effort in the two major tasks of environmental protection and talent cultivation. We have resorted to various channels to promote the concepts of energy conservation, environmental protection, and preservation of resources and have strived to materialize the concepts in our daily life and works via institutionalized requirement and dedicated monitoring.

We adhere to rigorous demands of our own for every link of our operation, from product design and R&D, supplier selection and management, materials, manufacturing, to customer service, thereby meeting international quality and management standards and the Restriction of Hazardous Substances Directive (RoHS) of the European Union. We have also passed ISO 9001 for the certification of quality management, ISO 14001 pertaining to environmental management, and SA8000 regarding social responsibility, which testify to our dedication to the corporate social responsibility.

BenQ LCD TV and LCD Monitor have obtained the carbon footprint-certification of PAS 2050 by the British Standards Institution (BSI) of the U.K., an achievement which leads other Taiwanese 3C manufacturers and underscores the company's commitment to the realization of a low-carbon society. Also, BenQ was awarded the champion in the A industry and commerce category of the "Taipei City Golden Energy Conservation Award 2009" by the Taipei City Government, an acknowledgement of the company's remarkable achievement in pushing energy conservation and carbon abatement over the past two years.

Staff is BenQ's most cherished asset. Therefore, in addition to the provision of a safe and comfortable working environment to our staffers, as evidenced by the passage of the OHSAS 18001 certification regarding vocational safety and hygienic management, we also care their physical and mental health, which won us the affirmation of Taipei City excellent award for promoting healthy working environment in 2005 and Taipei City piloting award for promoting healthy working environment in 2007. We have been assisting our staffers in achieving growth in expertise and spirit via the organization of various lectures, courses, and events.

As a company of international brand, BenQ owns excellent talents with different nationalities and cultures. The cross-culture communications and exchanges have broadened our vision and enhanced our understanding of the world. We expect that every staffer can find a stage in the company for the demonstration of their talent and play the role of a preacher in spreading our steadfast value of integrity, thereby injecting a positive and upward force into the society. BenQ is a brand of both technology and humanity. Along with our effort to closely follow the pulse of times and pursue technological innovation, we also believe that the sustainable development of life is rooted in land, nature, humanity, and emotion. Via the products and services of BenQ, as well as personal commitment of BenQ staffers, we will leave our descendants the legacy of a good environment and pleasant lives.

BenQ supports the global prohibition against the conflict minerals1 and corporates with suppliers to conduct investigation to avoid procurement of conflict minerals 2 and minerals that directly or indirectly finance for the benefits of illegal armed groups from conflict-affected regions such as DRC and adjoining countries3.

Remarks:
1. Research findings from international NGOs (Non-Government Organization) such as SOMO and Enough indicate that the Democratic Republic of the Congo, scene of the deadliest conflict since World War II, remains the most dangerous place in the world to be a woman or a girl—in significant part because of the international demand for electronic products that requires minerals found in the eastern Congo. Companies that produce electronics containing conflict minerals from eastern Congo have a responsibility to ensure that their business dealings are not inadvertently helping to fuel atrocities.
2. Conflict minerals: Tantalum, Tin, Tungsten, Gold and Cobalt.
3. DRC and adjoining countries: Angola, Burundi, Central African Republic, Republic of Congo, Rwanda, South Sudan ,Tanzania, Uganda and Zambia.